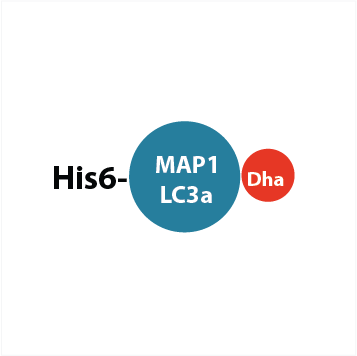 an activity-based probe for E1 activating enzymes and E2 conjugating enzymes that are involved in autophagy (e.g. ATG7 and ATG3, respectively), labeled with His6 on the N-terminus and Cys17 has been mutated to a Ser residue (S)

His6-3C-MAP1LC3a-Dha is an activity-based probe for E1 activating enzymes and E2 conjugating enzymes that are involved in autophagy (e.g. ATG7 and ATG3, respectively). UbiQ-158 is based on the MAP1LC3a protein sequence in which the C-terminal Gly has been replaced by a dehydroalanine residue (Dha). The N-terminus is labeled with an His6 affinity tag and a 3C protease cleavage site (QG), Cys17 has been mutated to a Ser residue (S). The design of UbiQ-158 allows it to be processed in a native manner by E1-E2-E3 enzymes that recognize MAP1LC3a and during this process it forms an electrophilic intermediate that can react with an active-site Cys residue in the E1-E2-E3 cascade, thereby creating a covalent bond.