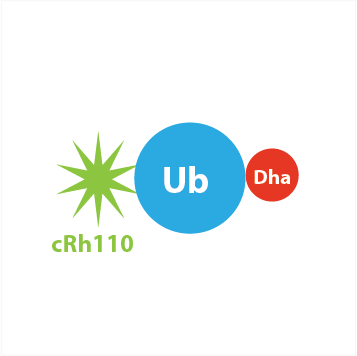 an activity based probe for Ub E1, E2 and (HECT/RBR) E3 ligases, labeled with cRh110 on the N-terminus

UbiQ-131 is a first of its kind activity based probe for Ub E1, E2 and (HECT/RBR) E3 ligases [Mulder et al. 2016]. It is based on the Ub sequence in which the C-terminal Gly76 has been replaced by a dehydroalanine (Dha) residue. The N-terminus is labeled with the green fluorescent 5-carboxyrhodamine110 dye (cRh110). It has been prepared by total chemical synthesis and is therefore well-defined in terms of dye site.