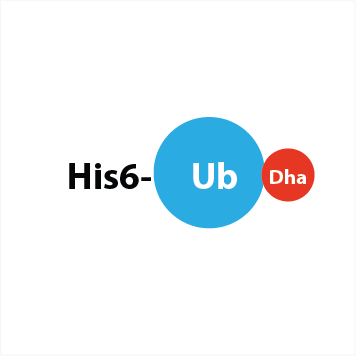 an activity based probe for Ub E1, E2 and (HECT/RBR) E3 ligases, labeled with His6 on the N-terminus

UbiQ-103 is a first of its kind activity based probe for Ub E1, E2 and (HECT/RBR) E3 ligases [Mulder et al. 2016]. It is based on the Ub sequence in which the C-terminal Gly76 has been replaced by a dehydroalanine (Dha) residue. The N-terminus is labeled with an His6 tag; two aminohexanoic acid (Ahx) linkers are used to create extra space between the His6 and Ub protein for efficient access of His6 binding entities. It has been prepared by total chemical synthesis and is therefore well-defined in terms of His6 site.