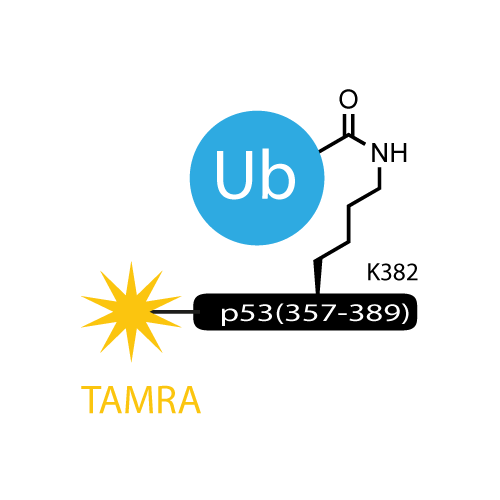 UbiQ-042 (K382 Ub-p53(357-389)-FP) is a class II fluorescence polarization HTS reagent based on the C-terminal peptide sequence 357- 389 of p53, which contains various lysine residues that are (mono)ubiquitinated. The peptide is modified on the N-terminus with a 5-carboxytetramethylrhodamine and conjugated at Lys382 to Ub via a native isopeptide bond. This site was chosen because USP7 (HAUSP), which deubiquitinates p53, was found to exhibit high activity to peptides with an Ub on Lys382 (unpublished data). Furthermore, this class II reagent contains a PGGS motif (aa 359-362) which was found to be important for USP7 binding.
(Sheng et al. 2006)