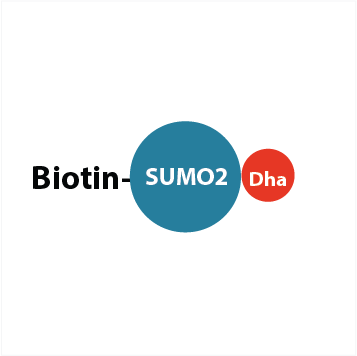 an activity based probe for the SUMO ligation pathway, labeled with biotin on the N-terminus

UbiQ-159 (Dha= dehydroalanine) is a first of its kind activity based probe for the SUMO ligation pathway. [Mulder et al. 2016] It is based on the SUMO3 sequence in which the C-terminal Gly has been replaced by a dehydroalanine residue. The N-terminus is labeled with biotin; an aminohexanoic acid (Ahx) linker is used to create extra space between the biotin and Ub protein for efficient access of biotin binding entities. It has been prepared by total chemical synthesis and is therefore well-defined in terms of biotinylation site.

UbiQ-159 is processed in a native manner by SUMO E1, E2 and E3 ligases and during this process it forms an electrophilic intermediate that can react with the active site Cys residue of the E1, E2 and E3 enzymes, thereby creating a covalent bond.